Things to Do over the National Day Long Weekend 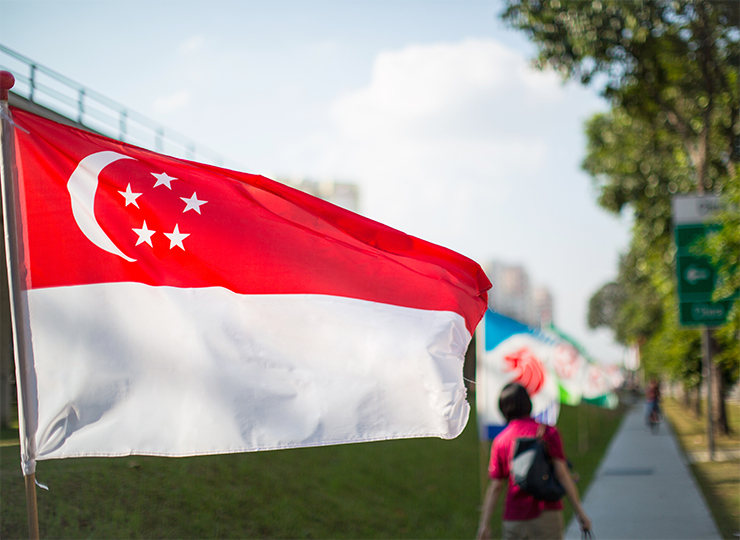 Revel in the nation's birthday spirit with friends and family.
With just a week to go before the nation celebrates its 55th birthday, we've prepared a list of activities for the whole family to enjoy over the National Day long weekend next week! They will not only inspire you to explore our nation’s past, but also celebrate its future, and reinvigorate your sense of unity and patriotism.
From discovering spectacular street art that dot our neighbourhoods and heritage trails, to a special NDP2020 experience featuring a full day’s worth of interactive entertainment online, rediscover what it means to be Singaporean and bond with your loved ones through these uplifting moments.
To start the celebrations off a little earlier, tune in to a live stream of the National Day Istana Open House hosted on President Halimah Yacob's Facebook and Instagram pages on 2 August, 10am. You’ll be taken on a virtual tour of rarely seen parts of the Istana, such as an air-raid shelter located in a cellar. The virtual Open House will also include segments hosted by the National Museum of Singapore and the Asian Civilisations Museum.
And now, on to our National Day weekend itinerary!

“Prosper in Wealth, Huat Ah!” by Temasek Polytechnic students,
portrays a modern take on Singapore’s hawker culture.
(Source: Choo Yut Shing)
Aside from great hawker food at Chinatown Complex Market and Food Centre, you will also find several murals on the ground level of the building. One of them is “Prosper in Wealth, Huat ah!”, a mural by Temasek Polytechnic School of Design students for the SG50 government initiative by NEA’s Our Hawker Centres. Spot quirky symbols referencing a blend of Singaporean hawker culture and Chinese heritage, such as curry puffs, crab legs, and the eponymous Bruce Lee with durian in hand, of course.
Around the area, located in a bicycle parking spot is a unique painting called “The Back Lane”, which depicts the scene of a family preparing for Lunar New Year. It showcases the simple two storey shophouses, built for the arriving waves of Chinese immigrants in the 19th century. The real bicycles parked in front of it seem to enhance the mural’s 3D effect. Just next to this is an artwork called “Welcome to our World”, which portrays the hardworking and resilient Samsui women and their trademark red hong tou jin (红头巾), translated literally as “red head scarf”.

Pick out your favourite mask in this vibrant mural, “Paper Mask and Puppet Seller” by Yip Yew Chong.
(Source: Choo Yut Shing)
From here, head to Mohammed Ali Lane and look for a historical mural painted by local artist Yip Yew Chong. Called “Paper Mask and Puppet Seller”, this piece pays homage to the long gone street hawkers. Filled with colourful illustrations of knick-knacks sold from the back of a bicycle, spot whimsical items such as masks, animal puppets and Chinese opera characters.


A glimpse into a vanishing trade, Yip Yew Chong’s “Letter Writer” invites you to take a seat.
(Source: Choo Yut Shing)
Other not-to-be missed murals of Chong's include the meaningful "Letter Writer", located on Smith Street. It showcases the important role of letter writers during the 30s to 80s, who helped semi-literate and illiterate immigrants write letters to their loved ones back in China. Further along, you will find the “Dragon of Amoy Alley” created by local artist Chris Chai. This massive dragon is painted on the side of a shophouse and is incredibly intricate. Look closer to appreciate its dragon scales, composed of six different Peranakan tile patterns.
For more Chinatown art, check out Artwalk Singapore.


Celebrate your love for Singapore at home this NDP2020.
(Source: ndp.gov.sg)

Kick off National Day by tuning in to NDP2020 online or on television, starting with the Prime Minister’s opening message, Parade at the Padang and Presidential Gun Salute. What’s special this year? The parade is going to the heartlands. If you hear the distinct roar of our F-15SG fighter jets, look out the window for a chance to catch their amazing aerial display performed right above you. Look down and you might find an impressive “Mobile Column” composed of military vehicles, from the Singapore Armed Forces and Home Team, moving past. And if you're lucky, a few highly-skilled “Red Lion” parachuters might land right in your neighbourhood. Make sure you give them a wave and cheer for bringing NDP to your doorstep!
In between morning and evening showtimes, get the kids involved in some face painting. Encourage them to explore Singapore flag-inspired shapes, colours and motifs. All you need is red and white face paint and paint brushes for this activity. You can also try making Merlions with toilet paper rolls, glue, scissors, old magazine paper and markers, along with these instructions.


Don’t miss NDP2020’s heart-warming evening show, best enjoyed with the family.
When the sun begins to set, make sure to order in some of your favourite comfort foods with Frasers Makan Master, while enjoying NDP2020’s evening show. Broadcast live from The Star Performing Arts Centre, watch live performances by everyday Singaporeans and well-known local celebrities that pay tribute to frontline fighters and community heroes who have made a difference during COVID-19. Expect messages of resilience, optimism and hope to shine through inspirational and uplifting stories. The show will conclude with a nationwide anthem, pledge moment, as well as a mesmerising fireworks show. If you submitted or know someone who sent in a video of themselves singing this year’s National Day song for NPD’s first Virtual Choir broadcast, then keep your eyes peeled for your few seconds of fame during the show.

Take a walk through Singapore's first satellite town by exploring Queenstown, which comprises the nation’s first neighbourhood shopping centre and sports complex. You will even be able to spot evidence of Singapore’s public housing evolution along the trail, such as retro five- and six-storey HDB blocks and unique butterfly-shaped blocks — rare sights these days.

Do you remember the snacks you used to eat as a kid? We’re talking about Marie biscuits, lemon puff biscuits, Horlicks biscuits or pineapple jam cookie biscuits, well, Queenstown is where they were first produced! Don’t be fooled by the quiet commercial building, Thye Hong Centre, sitting on the junction of Alexandra and Tiong Bahru road today. This was the former Thye Hong Biscuit and Confectionery Factory, one of the oldest biscuit manufacturers in Singapore. In its heyday during the 1960s, the busy factory employed more than 200 workers and produced 1,500 tonnes of biscuits every month.
From there, head down to the now 44-year-old Queenstown Public Library located along Margaret Drive, the country’s oldest full-time branch after Stamford Road’s National Library was torn down. Back when librarians manually recorded borrowed books one at a time, this library held many “firsts” such as becoming the first fully air-conditioned branch and pioneering computerised loan services. It is no wonder this cosy community space became the first of 26 other branches to be preserved under the National Library Board.
Next door is the former Queenstown Polyclinic which opened in 1963, and was Singapore’s first polyclinic. Back then, you only had to pay $2.50 per doctor’s visit and an extra 50 cents for medicine. Even though the clinic moved in 2007, the soul of the place remains in the form of non-profit shelter for homeless families run by New Hope Community Services called “Transit Point”, which stands in its place today.
Do you know the history behind the iconic red pyramid roof on one of Anchorpoint’s buildings?
(Source: Roots.sg)

A stone’s throw away, are Blocks 41 to 58 Stirling Road, Singapore’s first HDB blocks ever built. During the 1960s, the area was still underdeveloped and surrounded by swampland, which was why Singapore’s first batch of seven-storey flats looked fairly out of place. This was how they got their unique name “Qik Lao (七楼)” which means seven-storeys in Hokkien. End your trail with a soothing cup of coffee at Anchorpoint, and daydream over the fact that over 80 years ago, the building you’re sitting in was once the main factory of the former Archipelago Brewery Company.
As Singapore’s second brewery, this was where bottles of Anchor Beer were produced and exported. Take note of the little building with the iconic red, high-hipped pyramidal roof — this was the brewmasters' building and is now marked as a conservation site. And the overhead bridge that now connects Anchorpoint to IKEA? This was once a conveyor belt that transported bottled beer from the main factory to the canning line. Unfortunately, the entire production ceased in 1990 and this space was redeveloped soon after. Find out more about Anchorpoint’s fascinating history here.
We hope you’re inspired to walk the streets of Singapore’s past, celebrate its present, and look forward to a promising future. With so many exciting ways to celebrate our nation’s birthday, there’s no reason for this not to be one of your most memorable National Day weekends yet!
Back

Save $5 Off Your Meal with Frasers Makan Master!
in Promotions